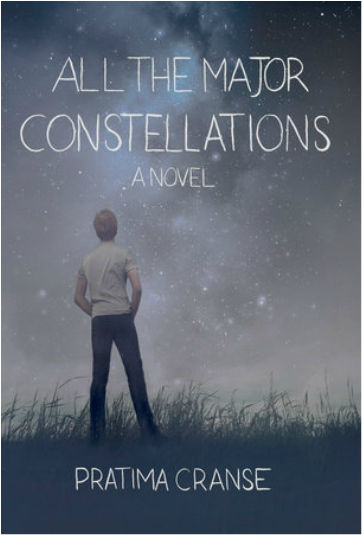 ​Laura Lettel is the most beautiful girl in the world…and for the first time she's noticed Andrew.

In the summer before college, as Andrew deals with the terrible accident that’s left him without the companionship of his two best friends, Laura approaches him, offering sympathy and the support of her fundamentalist Christian group. Andrew is drawn in, but is Laura’s only interest converting him? And what is Andrew’s real motive in following along?


What people are saying:

With a voice that is fresh, unique, and wry, Pratima Cranse, in her compelling debut, ALL THE MAJOR CONSTELLATIONS, captures the sexual frustrations, angst, and heartache of a young man on the brink of college. A lot can happen in a few months. And as Andrew navigates his way through tragedy, friendship, and love, the reader is completely held captive, eager for the answers this complicated protagonist will find. You will pull for Andrew to the end. This is a novel you won’t put down.
- Diane Les Becquets, author of BREAKING WILD and the award winning SEASON OF ICE

Pratima Cranse's writing is wise, funny, provocative, beautiful, and heartbreaking. So are her characters. So is this book.
- Sam J. Miller, author of THE ART OF STARVING

Adolescents will relate to Andrew’s exploration of religion and a world bigger than himself. Cranse creates an atmosphere where characters are safe to find humor in the face of tragedy and question the paths laid before them. VERDICT-- Older fans of realistic fiction will enjoy riding along with Andrew.–Carrie Fox, South Park High School, PA
-School Library Journal

Pratima hangs out (virtual style) with other up and coming YA authors.
http://www.barnesandnoble.com/blog/teen/15-of-our-most-anticipated-november-yas/

Pratima: Her take on NaNoWrMo- Two Inches of Snow.
http://hellogiggles.com/badass-ya-author-weighs-prep-nanowrimo/